Photo taken from the top floor of HTH.

The following words are my own opinions, and not necesarrily the views of HTH.

What is success in life? Different people will give you different answers. For example, in American culture, many subscribe to the "American dream" – a high-paying job, a handsome/beautiful spouse, a private house in the suburbs, and maybe having kids (the "maybe" being a more recent development). For another example, in the startup community, success is defined by building a great, profitable company, and possible selling said company for a big payout.

You've probably heard of these viewpoints before, but a certain group of people happens to define success much more radically. Hidden Treasures Home (HTH) is a orphanage located in a small village within Fuzhou, China. At time of writing, they house over 60 little ones, with 70 wonderful full-time staff members.

Curiously, HTH isn't your average orphanage – the non-profit only takes in children with disabilities.

I recently returned from a 10 day visit to HTH. It was profound in many sense - the severity of the children's disabilities, the lower but happier standard of living of the surrounding area, and – most of all – the intensity of the staff's compassionate care.

HTH has a main building with three floors of children. The children are grouped by how severe their disabilities are, from the first floor (least severe) to the third floor (most severe). The kids on the third floor generally can't speak beyond grunting or crying, and most can hardly move or feed themselves. This floor is where I volunteered during my time at HTH. 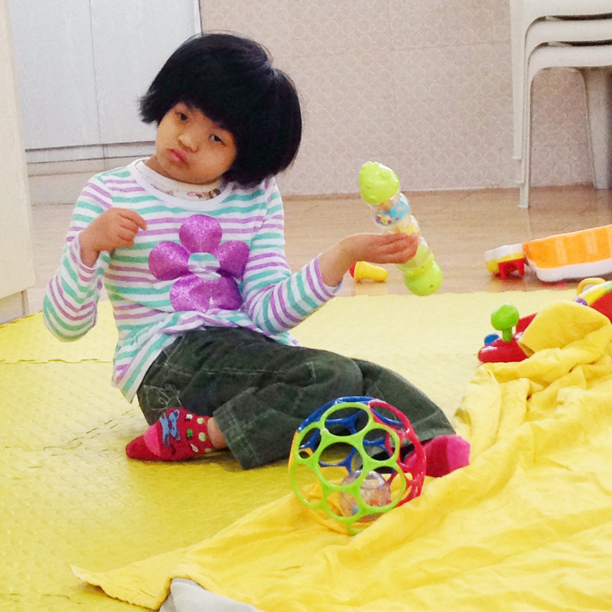 This is Chelsea. She has hemiplegia (R) from lack of oxygen at birth. She can't talk beyond a buzz-like hum, and she always has her mind in her own little world.

I helped feed Chelsea since she has too much trouble coordinating her movements to handle it by herself.

The staff on this floor were unbelievable. Each day they spend their time moving kids from the bedroom to the living room, making sure they are happy, solving their handicap needs, hand-feeding them during lunch time, moving some to another room for schooling, teaching them, moving them back, changing their diapers, giving them massages (important since most kids can't move their muscles), hand-feeding them dinner, continuing to appease them, and, finally, moving them back to the bedroom for the night; this is what a typical day looks like for a staff member on the third floor. 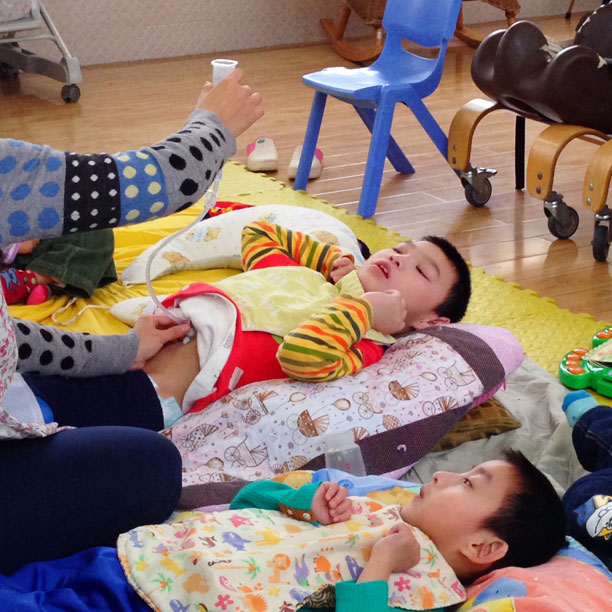 This is Isaac (middle) and Luke (bottom). They both share cerebral palsy and hypertonia. They cannot swallow food (their throat muscles don't work well enough), so they have to be fed through the feeding tubes surgically installed into their stomachs.

Luke likes to be held, so I often spent time holding and rocking him.

Surprisingly, it wasn't difficult being the new, short-term volunter in town. Each staff member was kind and patient with me, even though communication was tough since I could only speak a bit of Chinese, and they could only speak a bit of English. Despite the communication barrier, they were very interested in getting to know me. I made heavy use of HippoDict – an old but fast and reliable Chinese-English dictionary app; I looked up words to say to them in Chinese, and they looked up words to say to me in English. 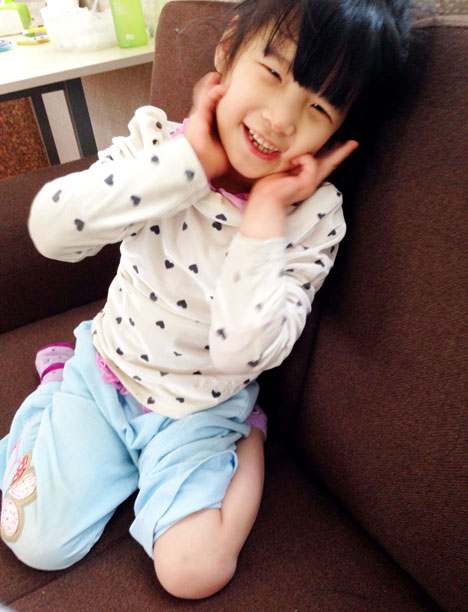 This is Deborah, the least severe case on her floor. She has cerebral palsy, and has had many seizures in her past. Thankfully she has recently not had any more, and is even learning to speak basic words. She loves to hop and crawl around the room all day, playing with anyone who has a bit of free time. Despite her disabilities, Deborah is always so happy, smiling and laughing throughout the day.

Staff members did not only include those who handled children directly. There were also those whom I respect just as deeply: the janitors, the cooks, the laundry doers, the guest caretakers, the generalists, the administrators, and probably others I don't know about. Considering parentless orphans are a marginalized minority that nearly no one wants to take responsibility for (even less so for those with disabilities), it is humbling to see these men and women dedicate their lives to caring and loving these little ones. 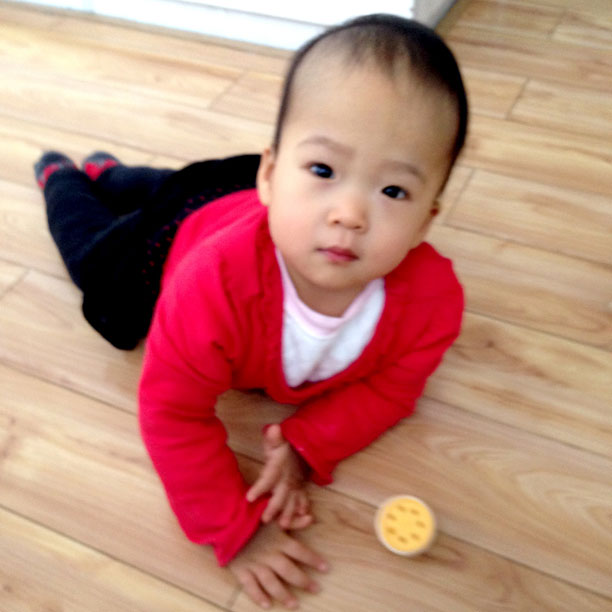 This is Xiao Fei (pronounced "sheeow-fay"). She has a brain shunt to help remove extra fluid in her brain for her hydrocephalus, and her legs are paralyzed due to her spina bifida. Despite all this, she is very intelligent, and has no trouble using her arms to drag herself around the room to get what she wants :)

I stayed at HTH for ten days. Each day was full of activity and joyful communion. It made me reconsider the "rat race" lifestyle that much of American culture encourages.[1] What's the end goal of it all?

Many people seem to be fine with pursuing the American dream.[2] For me, it isn't enough. I was lucky enough to be born into a loving, middle-class family. I did nothing to deserve it. With all the depression and misery around us, how can I be satisfied with simply living a comfortable life for myself? How could I sleep at night if I had no intention to help?

Mike and Deena – the American couple who founded HTH – had a similar realization in 2003. Except for them, they had the American dream. A home, a family, financial security – they had it all. But, after an encounter with God, they left what they had to lead what I define as a successful life: a life full of selfless sacrifice for others. Twelve years later, Mike and Deena are still fueling powerful impacts on children and volunteers every day at Hidden Treasures Home. 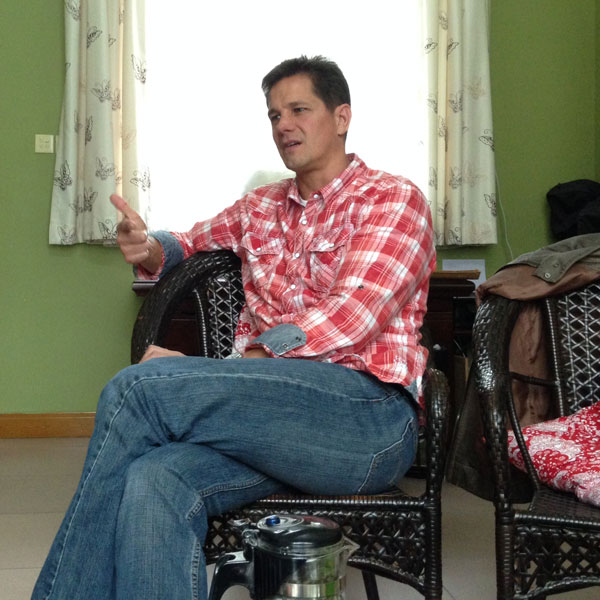 Mike telling stories about HTH to another international visitor (Deena was out of town during my stay at HTH).

"Why?" one might ask. "Why orphans with disabilities? Aren't there more effective ways to spend all these resources?"

I'm sure there are some who have this thought or something similar. From a logical point of view, it's not an unreasonable one. However, I can say with full confidence that there is a good reason to care. And, although I cannot say this with a logical hypothesis, I can say it by the Christian faith: somebody has to do it.

Each one of these little ones is a soul. And a soul is invaluable to God. Material worth is nothing; intelligence, good looks, money, pleasure - all such things are meaningless to God. What God truly wants is for us to love Him and our neighbor with full compassion. Understanding. Patience. Faithfulness. Humility. We as humans – and believers especially – are required to show these traits towards everyone, including (and even more so!) towards those rejected by everyone else.

Can you imagine yourself living your life for another? It's certainly not glamorous. In fact, it might go against everything you grew up believing as to what it means to be successful.

If you're someone who naturally cares for others, it's possible your compassion has become numb in response to the overwhelming media about all the terrible things that happen in this world. However, I encourage you not to lose heart. If you want to make a difference, you don't have to change the world; instead, do for one person what you wish you could do for everyone.

I challenge you, reader, to reconsider what it means to be successful. Be encouraged to use love and compassion as your units of measurement. If everyone showed more love towards one another, this world would certainly be a better place.

Take control of your life. Walk in wisdom, and be fulfilled.

Life's most persistent and urgent question is, 'What are you doing for others?'